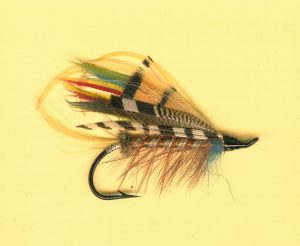 In 1972, Robert S. Conahay Jr., New York City advertising executive and honorary Lafayette College graduate, donated his extensive collection of Atlantic salmon angling literature to Lafayette College. Conahay collected over 300 books on angling from Great Britain, Norway, France, Spain, and North America, and includes such classics as The Salmon Fly (1895) by George M. Kelson and Leaping Silver (1940) by Lee Wulff. Other printed materials in the collection include maps, art prints, and a complete run from 1910-1970 of the English journal, Salmon and Trout. Conahay also donated his collection of 700 hand-tied flies, representing 470 different Atlantic salmon patterns. These colorful patterns, all but about 300 of which are mounted, are tied on size 2/0 hooks with dressing materials such as golden pheasant crests, blue seal’s wool, bustard wings, black ostrich, blue and yellow macaw, and silver owl twist. 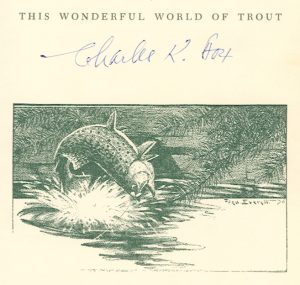 The Charles K. Fox Angling Collection, which includes nearly 200 volumes, primarily documents the American development of trout fly-fishing between 1930 and 1970 with works such as A. B. Flick’s Streamside Guide to Naturals and Their Imitations (1947), Ray Bergman’s Trout (1938), and Vince Marinaro’s A Modern Dry Fly Code (1970 ed.). Known as the Dean of the LeTort, Charles K. Fox, Lafayette College Class of 1931, himself has written several books on angling, including Advanced Bait Casting, The Book of Lures, This Wonderful World of Trout, and Rising Trout. In recognition of his contributions to the work of stream conservation, Fox received a national award from the Izaak Walton League of America. 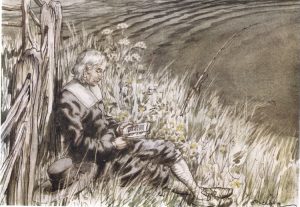 The Robert Tinsman Angling Collection comprises over 500 volumes, most in first or special editions, which primarily relate to trout and Atlantic salmon. Included are classics of British angling, such as Richard Bowlker’s The Art of Angling (1758?), as well as early American angling titles such as R.B. Roosevelt’s Gamefishes of Northern States (1862) and Mary Orvis Marbury’s Favorite Flies and Their Histories (1892). The Tinsman collection features 58 major editions of The Compleat Angler, including the Second Edition (1655) and George Washington Bethune’s first American edition (1847). Several of these editions, such as one with a handsome doublure, are representative of the fine bindings found throughout the collection. Robert Tinsman, president of a successful New York advertising agency, was a member of the Lafayette College Class of 1901 and a life-time trustee of the College. The Tinsman Angling Collection, acquired in 1975, was a gift of Tinsman’s widow, Mrs. Robert Morris. 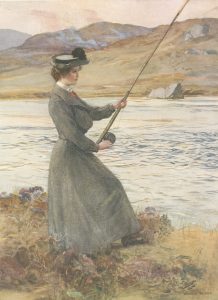 The library’s other angling holdings include works by women anglers, angling literature, and fish-themed artists’ books. One of the earliest known works on angling is attributed to Dame Juliana Berners, who was by legend variously a nun, a noblewoman, or a sportswoman. Her Treatyse of Fysshynge was first printed in 1496 as part of the Book of St. Albans. The library holds several editions, including the lovely 1903 printing by the Ashendene Press. In America, Mary Orvis Marbury (of the noted Orvis family) is credited with standardizing the names and dressings of American flies with her 1892 classic work, Favorite Flies and Their Histories. The collection also includes other contributions by women to angling literature, including Uncommon Waters: Women Write about Fishing, edited by Holly Morris, and “how to” guides such as Joan Wulff’s Fly Fishing: Expert Advice from a Woman’s Perspective published in 1991. Fly fishing has inspired some of the world’s great writers who have written essays, fiction, and poetry about angling’s lessons as a metaphor for life.  Angling literature holdings include Some Trout: Poetry on Trout and Angling by various authors with etchings by D.R. Wakefield, and classics such as Norman Maclean’s A River Runs through It and Mark Kurlansky’s Cod: A Biography of the Fish that Changed the World. Piscatorial artists’ books such as Gaylord Schanilec’s Mayflies of the Driftless Region, Carol Schwartzott’s Beyond Ichthyology and Paul Maurer’s Flourishing Fish appear in the collection. Recent acquisitions are represented by works of James Prosek, artist, writer, and activist including Fly-Fishing the 41st, Prosek’s account of an around-the-world fishing expedition following the 41st Parallel.