“Breathe for those who cannot”: Remembering Al-Mutanabbi Street 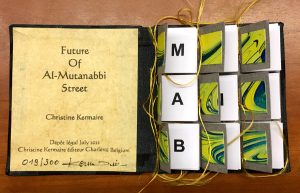 Skillman Library’s fall exhibit in the corridor on the main level features recent works by book artists wishing to commemorate and celebrate the spirit of the Al-Mutanabbi Street community.

On March 5th 2007, at the midpoint of the Iraq War, a car-bomb exploded on Al-Mutanabbi Street in Baghdad. The suicide attack tore through the heart of the city’s historic literary district, an area crammed with bookstores, outdoor bookstalls, stationery shops, and cafés. Thirty people died and more than 100 were wounded in the blast, for which no group has ever claimed responsibility. This street on the lip of the Tigris River has been described as Baghdad’s “third lung where the educated and students breathe.” Named after a 10th century Iraqi poet, Abu al-Tayyib Ahmad ibn al-Husayn Mutanabbi, the street has been a refuge for Baghdad’s literary and intellectual community.

In the summer of 2007, the Al-Mutanabbi Street Coalition was founded to express solidarity with Iraqi booksellers, writers, and readers. The project started with a first wave of letterpress-printed broadsides responding to the bombing and has evolved over the past five years to include artists’ books from contributors all over the world and an anthology of writing. The coalition, which now goes by Al Mutanabbi Street Starts Here, carries on with readings, cultural events, exhibitions, and new artists’ books that hold both “memory and future” of what was lost on that fateful day.

Works include Maria Pisano’s Lost and Found, Frances Jetter’s Street of Booksellers, and Al-Mutanabbi by Purgatory Pie Press, as well as those works created specifically for the Al-Mutanabbi Street Project, such as Christine Kermaire’s Memory of Al-Mutanabbi, which lists some of the names of those killed by the bombing.