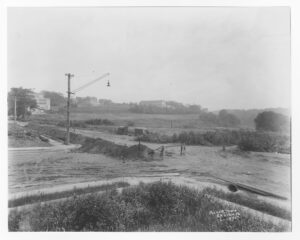 The city of Easton and the geographical region of Northampton County surrounding Lafayette College campus has undergone a succession of changes related to its inhabitants, industries, and infrastructures. Easton is located within an area originally named ‘lechawekink’ by the indigenous Lenape and Delaware peoples in reference to the forks of the Lehigh and Delaware Rivers. The city was laid out for the sons of William Penn, founder of the Province of Pennsylvania, prior to the imperial war between Great Britain and France known as the Seven Years’ War. Easton became the county seat and assumed local government simultaneously during the lead up to the American Revolution. In 1890, at the centenary celebration of its incorporation as a Borough, Easton’s city leaders touted the ingenuity of its population and beauty of its scenery. The natural setting and industrial advances became subjects for mass media during the golden age of postcards before the First World War. From its founding as a river crossing through the coming of the railroad, Easton’s fortunes rose on the agricultural character and industrial resources of the connecting Lehigh Valley.