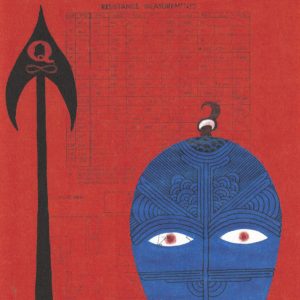 Back cover: Queequeg from Moby Dick in Pictures by Matt Kish. 2011

This spring the first floor of Skillman Reference Commons will be awash in images created to illustrate or evoke Herman Melville’s masterpiece Moby-Dick. The Skillman exhibits are inspired by a remarkable project undertaken by artist and librarian Matt Kish in 2009 to create one drawing for every page of Moby-Dick. Finished in only eighteen months and published in 2011, Kish’s book Moby Dick in Pictures is a visual tour de force 0f 552 images. The centerpiece of the Skillman exhibits is an installation in the reference area of Kish images with commentary by the students in Professor Chris Phillip’s Fall 2013 Literature of the Sea class. Also on display in the vitrines along the main staircase is an array of artists’ books showing how illustrators and artists have responded to Moby-Dick. Featured in the Lass Gallery are illustrations from three important Moby-Dick projects—the lithographs of Leonard Baskin and Benton Spruance and images from Matt Kish, including an original artwork just completed.