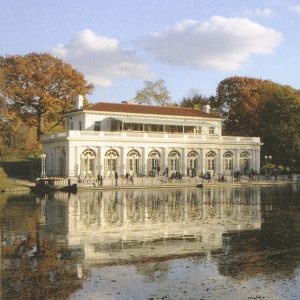 Skillman’s fall photography exhibit on view through December in the Lass Gallery presents a selection of Elizabeth Keegin Colley’s photographs, taken over a three-year period for Prospect Park: Olmsted & Vaux’s Brooklyn Masterpiece (Princeton Architectural Press, 2013). The first monograph on this superb public space, designed by America’s pre-eminent landscape architects, Frederick Law Olmsted and Calvert Vaux, the book also includes historical images and text by David P. Colley. The Colleys are College Hill residents—Elizabeth (Mary Liz) was a long-time freelance photographer for the College and David served for nearly a decade as the chair of the Friends of Skillman Library. Colley’s photographs have been described by reviewers as “the most beautiful photographs of Prospect Park you have ever seen.” The photographs richly capture the park in all seasons and at all times of day, showing it as both peaceful sanctuary and exuberant community meeting place. From the painterly images of the Long Meadow to the stunning shots of park waterfowl, the eighteen photographs offer a visual escape and breath of fresh air for viewers. The exhibit also features a Lafayette College connection with the sculpture of the Marquis de Lafayette by the eminent sculptor Daniel Chester French that stands just inside the 9th Street entrance to Prospect Park. The College’s statue of Lafayette in front of Colton Chapel was made from the original model for the 9th Street sculpture.