Florence Under Water: Commemorating the 50th Anniversary of the Great Flood 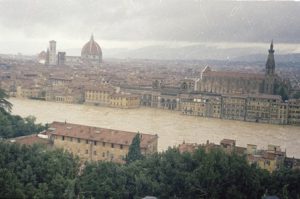 This exhibition in the Lass Gallery presents photographs by the Italian photojournalist Ivo Bazzechi that document the flood which devastated the city on November 4, 1966. After weeks of nearly constant rain throughout Tuscany, torrents of water, unleashed from overflowing tributaries and dams, converged in the Arno River. They inundated hundreds of villages upstream before striking Florence. Although the city had experienced floods in the past, including one on the same day in 1333, the deluge of 1966 was unprecedented in its fury and destructive power. Floodwaters, mixed with fuel oil from ruptured tanks, surged through the streets at speeds close to 40 miles per hour. Bursting through doors and windows, the water rose as high as 20 feet in palaces, churches, and museums. When it finally receded the next day, 450,000 tons of mud had buried the city. Hundreds of buildings were damaged, 32 people were dead, and thousands were left homeless.

A fundamental concern was the recovery of Florence’s irreplaceable cultural legacy. The flood had battered bridges, undermined the structural stability of historic architecture, seeped into cracked stone, and scarred buildings with oil and chemicals. Water contaminated with salts and nitrates saturated frescoes on walls and slowly began to sulfurize their surfaces. Hundreds of paintings on wood and canvas, including major masterpieces from museums and churches, had absorbed water, causing them to swell and their surfaces to detach. Sculpture of marble and bronze, including key works by Donatello and Ghiberti, were threatened by chemical degradation; works in clay and ancient pottery had been shattered by the force of rushing water. Nearly1.5 million books and thousands of unique manuscripts were destroyed in the Florentine National Library, while countless volumes, consumed by mold, were rapidly disintegrating. The threat of losing this priceless heritage inspired immediate international cooperation, remarkable given the tensions of the Cold War, including significant relief efforts from the United Nations and contributions from institutions worldwide. Hundreds of volunteers across the globe traveled to Florence, from professional art historians and artists to young “Mud Angels” who cleared the streets of mud, sifted through wreckage, and transported works to safety.

Educated in the city’s illustrious history and trained in Italy’s exacting institutes of restoration and chemistry, Florentine conservators were committed to preserving their cultural and artistic heritage. They saved works and risked their lives as flood waters swirled around them. Conservators improvised laboratories to dry out waterlogged altarpieces, painstakingly transferring painted surfaces to new supports and restretching canvases. They detached frescoes from walls, remounting them on masonite, and conserved others onsite over several years. Scientists pioneered new approaches to conservation, as did Enzo Ferroni, among the first to use nanotechnology to preserve art, in 1966. The flood occurred half a century ago, but caring for the works it damaged continues to this day as new methods are sought to best preserve an extraordinary cultural legacy. As climatic changes across the world and the recent floods in Louisiana and Mississippi demonstrate, our environment has become increasingly unpredictable. It is imperative that we protect the global heritage that we share and ensure its preservation for the future.