Islam in Africa: A Pilgrimage to Touba, Senegal. Photographs by David Katzenstein 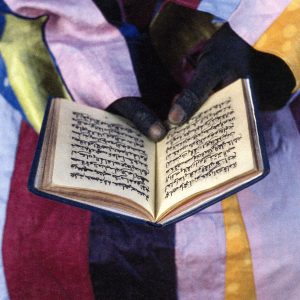 A Mouride, dressed in a Bay Fal robe, studies from a book of Ahmadou Bamba’s poems from David Katzenstein’s Islam in Africa (2009).

For three days each year, the population of the west African city of Touba in Senegal swells from its normal 900,000 inhabitants to more than four million people. Mouride pilgrims from all over Senegal and beyond pour into Touba for the annual Islamic pilgrimage “Le Grand Magal de Touba.” The Mouride brotherhood was founded in 1883 by Cheikh Amadou Bamba, a Sufi mystic and religious leader, who taught the virtues of pacifism and hard work, and established the city of Touba in 1887 as the spiritual center of his movement. Exiled by the French colonial government between 1895 and 1907 because of his growing influence, he was eventually embraced by the French and awarded the French Legion of Honor. Bamba died in 1927 and is buried in the great Mosque at Touba. His descendants have continued to lead the movement, which is now one of the fastest-growing religious communities in Senegal, with increasing political influence. Mouride communities have also flourished in major cities with large Senegalese immigrant populations, particularly New York and Paris.

The many faces of the Magal—teeming streets, overloaded trains, ecstatic celebrations, and contemplative moments—have been captured in the color and black-and-white photographs by David Katzenstein currently on display in Skillman Library’s Lass Gallery through June. Katzenstein is a New York-based photographer, who has traveled the world, either on assignment for publications or on personal journeys. His extensive body of work includes magazine essays on “The Master Musicians of Jajouka in Morocco,” “Johnny Clegg and Zulu Music and Culture,” “The Music and Culture of Bali,” “President Aristide and the Future of Haiti,” and “Arabs in America and the Gulf War.” His photographs have been exhibited at numerous galleries in New York City, as well as at Phillips Exeter Academy and Temple University.