Lafayette, We Are Here 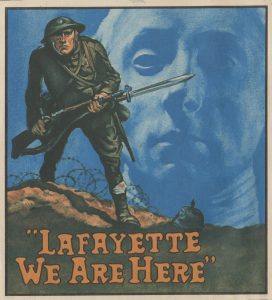 On July 4, 1917, General John J. Pershing, commander of the newly-arrived American Expeditionary Force in Europe, made a special pilgrimage to a small cemetery on the outskirts of Paris. There the General and his staff stopped beside a simple grave. It was Pershing’s aide, Colonel Charles E. Stanton, who actually uttered the ringing words: “Lafayette, we are here!”

Memories of Lafayette’s contributions to the American Revolution resonated with the many Americans who sympathized with France and her allies during World War I. This exhibit explores ways in which Americans acknowledged their debt to Lafayette as they came to France’s aid during World War I.