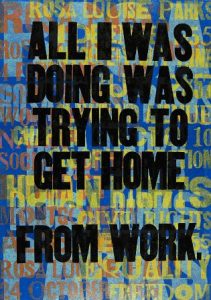 Amos Paul Kennedy, Jr. is an American printer, book artist, and papermaker best known for printing posters with social and political quotes related to social justice, especially the legacy of the American civil rights movement. This spring the Lass Gallery features an exhibit of sixteen prints from Kennedy’s series honoring the life of Rosa Louise Parks. Over sixty years ago, Rosa Parks refused to give up her seat on a bus in Montgomery, Alabama. She was arrested and convicted of violating Jim Crow segregation laws and served as the catalyst for the Montgomery bus boycott. The prints focus on statements made by Parks that reflect her work as a lifelong human rights activist and pioneer in the struggle for civil rights. Kennedy’s images graphically transmit the words of Rosa Parks through the use of vivid colors and bold typeface. Lass Gallery, Skillman Library, February 1 -August 31, 2019