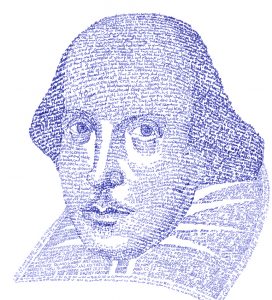 Skillman Library marks the quatercentenary year with an exhibit of selections of artists’ books and fine press limited editions from Special Collections that celebrate the legacy of Shakespeare. Works include The Tempest designed and bound by Caliban Press with text taken from the First Folio edition of Shakespeare’s works published in 1623. Illustrated with woodcuts, gatefolds, pop-ups, and a volvelle, the edition was inspired by a variety of sources including John Coltrane’s Olé, the film Black Orpheus, and Prospero’s library. In his work Solace, book artist Sam Winston de-constructs the syntax of Romeo and Juliet and categorizes the words into a visual representation of the emotion expressed by the play’s protagonists. The Circle Press imprint of Macbeth features striking images of masks created by Ronald King into bold collages with the intent of making the masks “more terrifying, monumental … and modern.” The exhibit also features a collaborative work by Lafayette Professors Curlee Holton and Ian Smith that re-imagines Othello in the context of contemporary awareness of issues of race, identity, and culture.