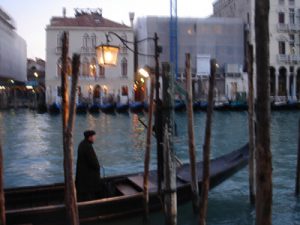 As part of the 2011 Roethke Humanities Festival on “The Renaissance Spirit,” Skillman offers a photographic tribute to the city of Venice with the exhibition Vedute di Venezia.  The photographs are the work of , a Montreal photographer, who has been photographing Venice for many years.

The title of the exhibition makes reference to 18th and 19th century landscapes (vedute) of Venice by painters such as Canaletto, Monet, Sargent, Turner, and Constable.  “And yet,” says Zebrowski, “my photos are not landscapes.  They are details suspended in time: fragments and moments.  They represent a portrait of a city threatened by water, the portrait of a city whose very existence is endangered because of its geography.”

Zebrowski’s photographs capture the haunting beauty of Venice—its brilliant lights, dark waters, and frescoed hues.  Also on display is her 2006 artist’s book, also called Vedute di Venezia, which has the feel of a small jewel box, filled with exquisite, tiny images and an essay about Venice’s precarious future.

Zebrowski turned to photography in 1997 after a long career in the film industry.  Since then she has had ten solo shows and been awarded numerous grants and residencies.  In 2007, her Ode A Venice was named best photo essay by the Quebec Magazine Association.  Her photographic artist’s books are in the collections of numerous libraries, including the National Library of Canada, Brown University, Smith College, the University of Pennsylvania, Wellesley College, Yale University, the University of California Berkeley, and Lafayette.